Secret is a charm that we, women, hide in ourselves. A mysterious gaze, a secretive smile, or an adorable secret that we share with a friend. But we also know other secrets, for example those who tell us, how to emphasize our image on the beach, visually reshape the body and thus conjure up just the right amount of confidence

Emphasize waist
With a suitable combination of colours and the design, you can emphasize the waist, even if your figure is somewhat more boyish. Choose from among the designs, where the waist is explicitly indicated, while the top and bottom of the swimwear differ visibly. The effect is best achieved with one piece swimwear.

How to narrow broad shoulders
Broad shoulders? Choose a swimwear design with straps that close or tie behind the neck. This will visually narrow down the shoulders. Straps are wider in that type of swimwear, which enables a pleasant wearing and creates a beautiful image at the same time. To additionally emphasize the cleavage, select a bra with the push up effect.

For a pretty booty
The appearance from behind also matters with swimwear. It is beautiful, if the feminine curves are emphasized, be it the bust or the rear. A lush pattern in the back part of the briefs creates a pretty and inviting rear.

Emphasize your cleavage
A lush cleavage is created by bras with the push up effect. Visually, the bust will also be larger and more attractive in swimwear, which has rich patters, structures or provides emphasis through various ruffles, patterns, colours or even an attractive tying of straps. The briefs should be of a single colour or with fewer patterns, so that the gaze is directed to the bra.

Reduce triangular form
Broader shoulders and narrower hips are known as the triangular form. A suitable choice to reduce it is the swimwear with a bra tying or closing behind the neck, which narrows down the shoulders, or swimwear designs which, with details, emphasize the waist or the lower part of the body. For example, choose a design with panty briefs, which will widen you just right in the hips and thus create a more symmetric form. 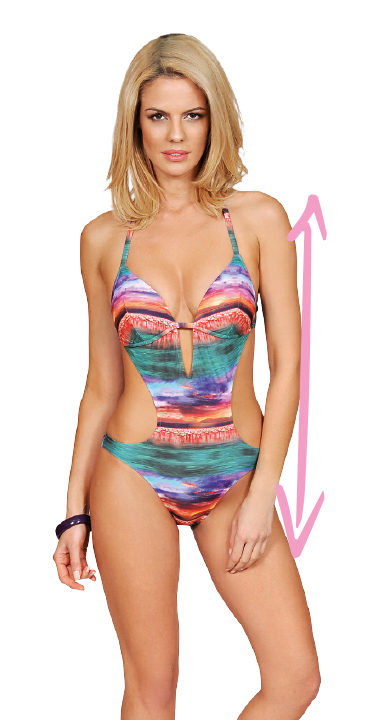 Extend your form
Swimwear with patterns down the middle or on the sides extend and emphasize the form. The patterns can be stripes, single colour inserts or floral motifs. The tailoring, too, is important, with the best choice being the monokini swimwear with slightly deeper cuts in the waist, thus emphasizing the hourglass form even more. The form will thus be extended and more elegant.

You are entering English store. Ok, continue. In case you want to visit a different store, please choose your desired country
Please select